Sunday, November 14, 2021 at 3:00 pm
Grace St. Paul’s Episcopal Church | 2331 E. Adams St, Tucson, AZ
Seating is limited. Be sure to reserve your seat for this “Pay What You Will” concert.
Donations at the door are greatly appreciated.

Click here for important health and safety requirements for audience members at this concert. 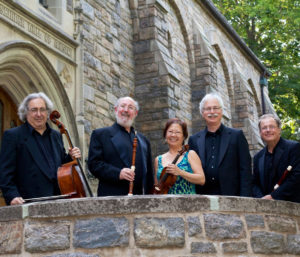 In 1973, fresh from the Juilliard School, the members of The Aulos Ensemble began a collaboration that ushered in the original instrument movement in America. With a discography on Musical Heritage Society and Centaur Records, Aulos is the most recorded American chamber group in its field. After 48 years of concerts, the ensemble will celebrate its final season in 2021. A long-time favorite of Tucson audiences, Aulos is delighted to return as part of its farewell tour. The program features highlights of the French Baroque that have delighted our audiences and brought the ensemble international critical acclaim.

“…authentic Baroque performance at its best”
—The New York Times

“Thanks to groups such as Aulos, performances on early instruments no longer seem exotic or experimental.”
—The Washington Post