Baroque music was traditionally considered to go until 1750, the year of J. S. Bach’s death. But as we have become more aware of the delayed influx of European music to the Americas, 1800 probably better defines the period.

Type of musical compositions during the Baroque period include:

You may not think of opera in the Baroque period, especially one by Claudio Monteverdi—L’incoronzaione di Poppea (The Coronation of Poppaea)—first performed in 1643, the last year of his life. He straddled the Renaissance and Baroque eras. A 2014 performance of this opera at the Paris Opera at the Palais Garnier featured a small early Baroque orchestra made up of a handful of violins and violas, one cello, one double bass, 3 theorbos, 2 harps, and 2 harpsichords. 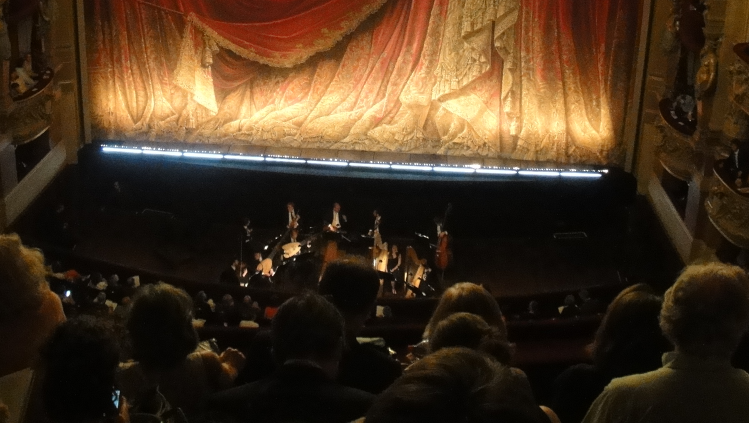 Here are some remarkable Baroque pieces by composers you may not know. Click the images or text links to watch and listen to them on YouTube.

Barbara Strozzi, one of the first women to have her music published under her own name, was active in Venice in the 1600s. Her “Lagrime Mie” is performed by soprano Mary Bevan accompanied by Elizabeth Kenny on theorbo. 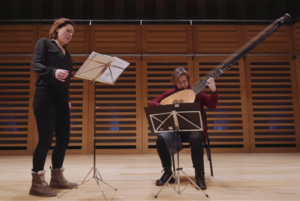 Marin Marais composed “Sonnerie of Sainte-Geneviève du Mont de Paris” (often called “The Bells”) in 1723. It is considered a passacaglia or chaconne, with a repeated bass line of three notes with intricate variations played on top. 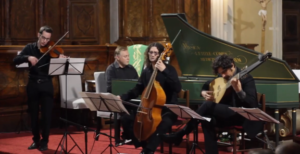 The score for this piece (available here, at the International Music Score Library Project, imslp.org) shows the three parts: Violon, Viole, and Clavecin (violin, viola da gamba, and harpsichord). The theorbo doubles the bass notes in the harpsichord part. As is often the case, Baroque keyboardists use the figured bass line (the small numbers, sometimes with sharps and flats), which is a shorthand for the chord to play, and they then create an appropriate—often improvised or embellished—accompaniment. Click to read more about figured bass lines.

Baldassarre Galuppi, a late Baroque composer, may not be a household name, but he wrote some beautiful music. Here is his “Concerto a 6 for 2 flutes, strings, and basso continuo in D minor”. It offers a wonderful opportunity to hear the mellow sounds of two Baroque flutes, made of wood, not silver. 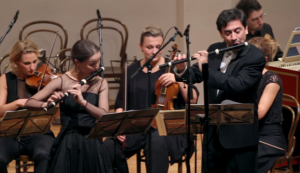 For more pieces in all periods of early music, you may wish to explore some favorite pieces of our Board members.

Return in time to Renaissance Music.