We thank Concert Sponsors Jamie and Jim King for their generous support of this performance. 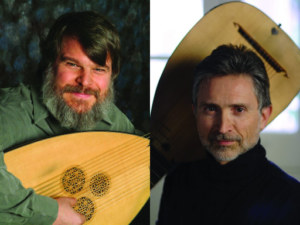 The lute was the most beloved solo instrument of the Renaissance, but lutenists often doubled the pleasure by performing as duos. A large repertoire of exciting lute duets survives from throughout Europe, but the pinnacle of

this art was achieved in Italy and England. The leading performers of the time cultivated a style of duets in which the two players challenged each other by trading passages back and forth with increasingly dazzling feats of virtuosity.

Read the program for this concert, including program notes by Paul O’Dette. (PDF)

Lutenist Paul O’Dette, winner of a Grammy Award and the Diapason d’Or, has performed at major international festivals throughout the US, Europe, and Australia. He has appeared with respected conductors and ensembles including Jordi Savall, Gustav Leonhardt, Tafelmusik, The Parley of Instruments, and Tragicomedia, and has recorded for many labels. Read more about Paul O’Dette.

Grammy-nominated lutenist Ronn McFarlane is a founding member of Ayreheart and the Baltimore Consort. He has toured throughout the US and Europe, including appearances with Apollo’s Fire, The Bach Sinfonia, Houston Grand Opera, the Oregon Symphony, and the Portland and Indianapolis Baroque Orchestras. Read more about Ronn McFarlane.