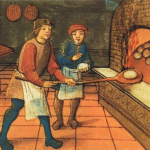 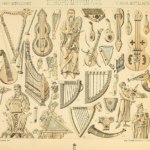 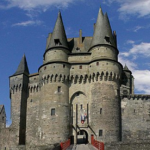 Music was either sacred, for use in church, or secular, non-religious. Most pieces were written down, but some were improvised. Music included works for voice and instruments in various combinations.

One of the most well-known Medieval tunes is “Sumer is icumen in,” a round set for several voices, written in the middle of the 13th century. It is, according to the British Library, the oldest known musical round with English words. Click on the image below to enlarge the manuscript.

Click to listen to the piece, accompanied by Medieval art.

“During the Medieval period the foundation was laid for the music notation and music theory practices that would shape Western music. … The most significant of these is the development of a comprehensive music notational system which enabled composers to write out their song melodies and instrumental pieces on parchment or paper. Prior to the development of musical notation, songs and pieces had to be learned ‘by ear,’ from one person who knew a song to another person. This greatly limited how many people could be taught new music and how wide music could spread to other regions or countries. The development of music notation made it easier to disseminate (spread) songs and musical pieces to a larger number of people and to a wider geographic area.”
[Source: en.wikipedia.org/wiki/Medieval_music]