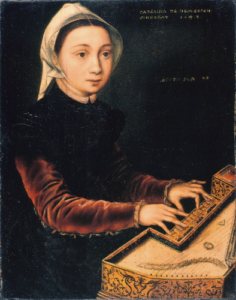 During the Renaissance, “the characteristic ‘ideal’ sound became that of four of more voice lines of similar character and equal importance in a homogeneous tone color, instead of three more or less dissimilar lines in contrasting timbres as in the Middle ages. The idea medium was an unaccompanied vocal ensemble (a capella)…. Composers began to write all the parts simultaneously instead of successively, as in the Middle Ages.” (from A History of Western Music by Donald Jay Grout)

A few prime examples of Renaissance music are these favorites among many early music fans.

The quartet in the first version below includes a soprano, countertenor, baritone, and bass.
In the second version, you can follow along the score, which notes the onomatopoeia (bird songs). 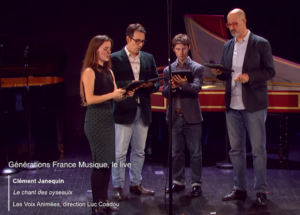 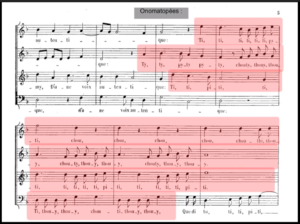 “Spem in Alium” by Thomas Tallis is a motet for 40 voices. According to this piece’s Wiki page:

“The motet is laid out for eight choirs of five voices (soprano, alto, tenor, baritone and bass). It is most likely that Tallis intended his singers to stand in a horseshoe shape. Beginning with a single voice from the first choir, other voices join in imitation, each in turn falling silent as the music moves around the eight choirs. All forty voices enter simultaneously for a few bars, and then the pattern of the opening is reversed with the music passing from choir eight to choir one. … The work is a study in contrasts: the individual voices sing and are silent in turns, sometimes alone, sometimes in choirs, sometimes calling and answering, sometimes all together, so that, far from being a monotonous mass, the work is continually changing and presenting new ideas”

Giovanni Gabrieli experimented with space and sound, often positioning brass choirs in different parts of a venue to play antiphonally, echoing each other at times. He also wrote simpler pieces for brass ensembles of varying sizes.

Here are three different presentations of his “Canzona per Sonare No. 2” for brass quartet (sometimes arranged for quintet).

Return in time to Medieval Music.