When you attend an early music concert, three key characteristics distinguish it from other classical music performances:

Sackbut, dulcian, viola da gamba, vihuela, lute, recorder, and harpsichord are some of the instruments that musicians in an early music ensemble might play. These are all ancestors of modern instruments, with different constructions and different tones.

The Parthenia Viol Consort will perform with their instruments in Arizona Early Music’s current season on February 27, 2022. You can almost tell that these early strings were descended from the guitar, and can be strummed as well as bowed and plucked. Like other early music instruments, viola da gambas come in several different sizes to provide a wide range of tones and timbres.

Other instruments look more unusual, such as the cornetto (predecessor of the trumpet) and the long-necked, many-stringed theorbo (rather a nightmare for traveling theorbo players). Both Kiri Tollaksen and John Lenti have performed for Arizona Early Music a number of times.

Because earlier instruments sound softer than their modern equivalents, the music often seems more intimate, and that intimacy and sweetness of sound is a special quality of early music, and the reason it is sometimes called “the voice of emotion.” 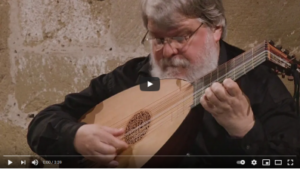 Click the video image at the left to listen to Paul O’Dette’s lute playing to get a taste of an instrument in widespread use before 1800. He will perform lute duets with Ronn McFarlane in an Arizona Early Music concert on March 27, 2022.

Some instruments have different versions depending on the musical era in which they were played. Compare the Renaissance and Baroque recorders below, both of which came in many different sizes. Similarly, baroque violins, cellos, flutes, and oboes differ from their modern equivalents. 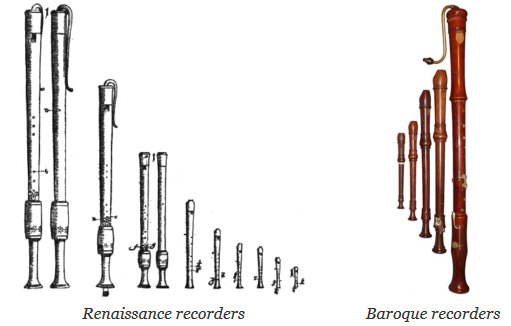 Musicians not only perform on originals or copies of instruments appropriate to the era, they also use techniques and ornamentation to get as close as possible to the soundscape of what listeners would have heard at the time the music was composed. Vocalists must also alter their technique, for example, to use vibrato as an ornament, whereas in modern times we hear vibrato in the voice, or violin, virtually all the time. These differences truly make the music sound different.

The older the music, the more the musicians must become co-composers, because that was the style of the time: to allow whatever mix of instruments or voices happened to be available, and for performers to be able to create at their own level of expertise.  This takes not only substantial academic research, but virtuosic playing and a talent for improvisation. Jazz is comparable, grounded both in technique and structure, but encouraging players to make every set their own—never the same, always creative.

Listen to two very different performances of “Yo Soy la Locura” by Henri du Bailly (1590?–1637), a song about the madness or folly of love: “All serve at my name,” says Folly, “and yet there are none who believe themselves mad.” Centuries later, the madness of love is still with us.

We invite you to delve further into this world. Peruse the Medieval, Renaissance, and Baroque articles, watch their diverse examples of both familiar and lesser-known works, and browse favorite performances of our Board members.